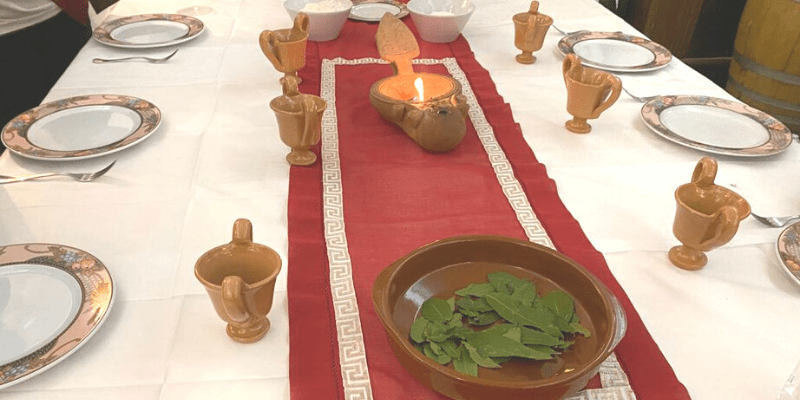 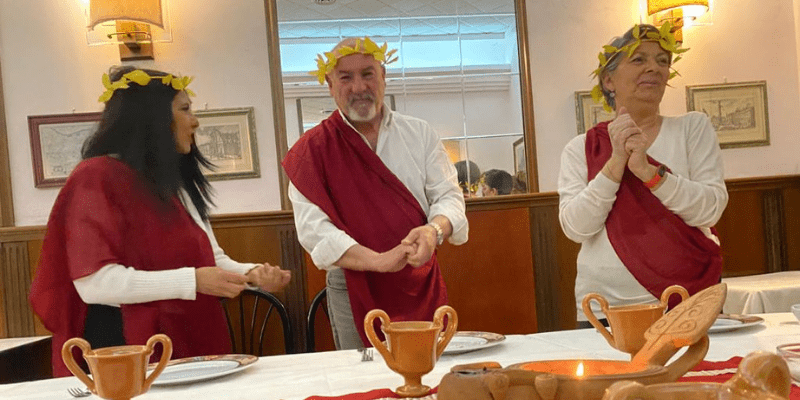 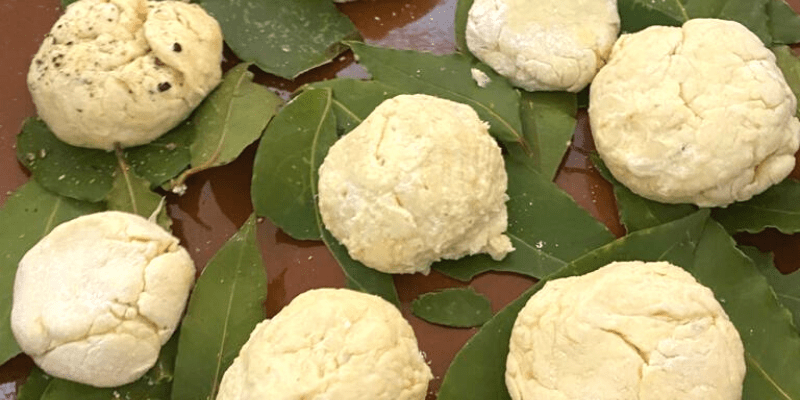 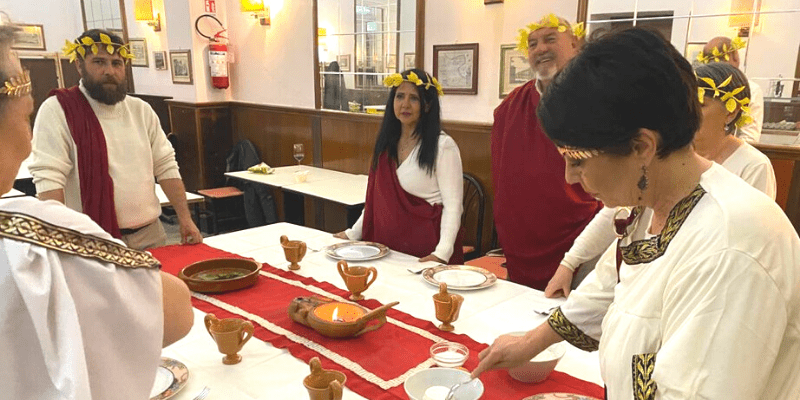 Take part in our Ancient Rome cooking class to learn how to prepare three typical Ancient Roman dishes. Feel like a true ancient Roman enjoying the Virgil’s moretum sauce, the libum and the mjma, a kind of meatballs. In fact, our chef will lead you on this journey, explaining who Virgil was but also the uses of the ancient Romans. Moreover, our archeo-chef will explain you the historical context. Again, to enter the atmosphere, you will wear a toga, like a true ancient Senator. Your will drink from terracotta glasses, a ceramic widely used in Imperial Rome. A lucerne, an oil lamp, will create a suggestive and welcoming environment, typical of the triclinium of ancient Rome, the banquet hall. Each person, according to the customs of the time, will have to bring their own handkerchief to participate in the banquet.

In the first part, you will be greeted by our chef who will welcome you on this journey back in time. Mulsum will be served, the cooked wine flavored with honey, used by the ancient Romans for the gustatio, the tasting. Then, you will start with the moretum sauce, following the recipe described by the great poet Virgil, the one who wrote about the epic of the birth of Rome. After that, you will create the typical bread of Ancient Rome, the libum, which was usually offered to Jupiter by the spouses during the wedding or as an offering for sacrifices. Whose recipe has been handed down to us by Cato the Censor. Subsequently, you will learn how to make mjma, a dish created by Ateneo of Naucrati. He was a scholar of the library of Alexandria. After that, you will sit down and enjoy your meal like a true ancient Roman, sipping a good glass of red wine.

In addition to the dishes created by you, the menu will include other typical dishes of a Roman banquet. Another of the dishes will be the Apiciana tisana, a kind of soup made from cereals and legumes, according to the recipe of Apicius. He was one of the great Roman gastronome, author of the de re coquinaria, a book with five hundred recipes more or less. Again, to accompany the meal, the hypotrimna, a very tasty sauce that enriches a salad of baby spinach, smoked scamorza cheese, honey and raisins. Finally, to conclude the meal, the typical holiday dessert, the pane astrolaganus, a sweet bread with honey, wine and dried fruits.

After the meal, you will be greeted with a small gift called apophoreta, to thank you for participating. So, take part in an ancient Roman cooking class and a banquet like a true ancient Roman.